Hello to everyone who reads this! Not a lot of new things have been going on since I last wrote, but there are a few short experiences that I would like to tell you about, so without further ado or delay here they are…

The first one I would like to tell you is a short story about something very intriguing indeed. The picture underneath is something you have probably never seen nor will you probably see it for yourself in person and there is quite an interesting story behind the picture.

The picture you just saw above is a picture of a tiny stone so tiny you need binoculars or a magnifying glass in order to see the shape that you just saw. Don’t believe me? Well here is another picture of the same stone; I am holding it in my hand!

Now you may ask, “What on earth?” Well this lady was in a spring or creek or whatever you want to call it, and her and her friends were looking around and she looked and saw this stone and decided to pick it up, and she discovered a star in the stone. How she came to find something so small and so unique I don’t know but I believe the Lord guided her hand!

I have two more amazing experiences to tell you. The first one happened to one of my co-workers and the second one happened to me and a different co-worker (different from the first story that I will tell you).

My co-worker was doing our latest work. We are door-stepping a newspaper article about archaeology events and current world events called the Discovery Times – South Pacific. She was at this mailbox and all of a sudden there was this elderly lady behind her. The lady was holding out a jacket and insisted she put the jacket on and keep it.

This lady was on a walker and there would be nowhere this elderly lady could have gotten to and disappeared in the time when my friend would have turned around. So in other words, when my friend turned around, she should have still been able to see the lady walking slowly away like elderly people do.

I should also add that my friend later went back with the leader’s wife and they asked if they had anyone living in that retirement center by that name, and it came to no surprise when they couldn’t find anyone by that name there.

I told my friend that the reason the angel’s name was Joy was because it was the angel’s mission to come and bring her Joy. 🙂

This friend wanted to have me video him; he said that he had just finished writing a new song and wondered if I would be willing to take the camera and video him. Of course I said I would, and so we set up everything downstairs and then started the process. We tried videoing it twice and my friend was making mistakes and then he realized that we hadn’t asked for the Lord’s blessing to be upon us, so we paused right then and there and said a prayer. 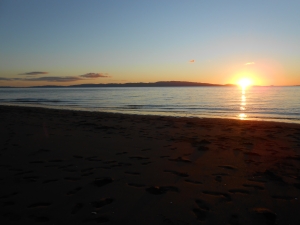 While I said the prayer I could feel the Holy Spirit’s presence enter into the room. We then tried a 3rd time and he messed up once again. So we decided to try once more, and I felt that this time it would work and we would make no more mistakes.

While I was taping all of a sudden I noticed that that there was a strange light that was shining down upon my friend. Now the video was totally clear just minutes before and I actually had to look up from the camera to make sure nothing had changed in the room.

The room was exactly the same, and I know that I had done nothing to the camera to change the effect. So my friend didn’t make any mistakes. So, I showed my friend the video and I explained to him what had happened with the light.

My friend then told me he had been praying that the Lord would block him out of the picture and let it be known that it was God who was behind his songs. We were both trembling because we knew that it was the Lord’s presence with us in the room.

Just in case you don’t believe me, I have given the link to the video below for you to go watch and see for yourself!

The song is first my friend talking, and then he answers back for the Lord, (as if the Lord were talking back) and it is when he sings that part in the song that the light appears! The Lord is so good to us and to reveal to us that He is behind us and working through us!

I hope that it also encourages you folks that are reading this. If we ask for the Lord’s blessing and for His presence He will answer and He will be there among you!

One thought on “The Lord is Among Us!!!”