They were told to go and investigate the land, the land that they had heard about for so many years, one in which they had talked about and maybe even dreamed about for 40 years. Now  two of the young men were asked to go and spy on this land, what a privilege, and dangerous adventure, but they knew the Lord would be with them!

Doe this ring any bells yet? I’m talking about the children of Israel, back in the days when Joshua was the leader, and although we are not told the name of these two spies we are told of the experience that they went through, one in which I am going to take you through. I highly encourage you to read it for yourself in the book of Joshua, beginning in Chapter 2, and also in the book Patriarchs and Prophets Chapter 44.

We can learn many lessons from this story and I plan on bringing up a few of these. Now on to the story! The land that they were going to spy out was called Jericho. Many people knew about the children of Israel and had heard the stories of what the Lord had done for them with the Egyptians and the Red sea, but that was a long time ago and 40 years had passed since then. There was probably many people who forgot or didn’t think it mattered anymore, they were after all a pagan city and did what they wanted.

Joshua sent out the two spies and they somehow got into the city, we aren’t told how but I’m sure the Lord lead them to know how to do it. In the city they got a good look around and could see all the wickedness and knew that the Lord would give them the victory. They then went to the house of a harlot, a woman by the name of Rahab. Perhaps they thought that it would be inconspicuous to stay at her place, people would less likely suspect them if they stayed with a harlot. Or perhaps the Lord told them to go to that house; in the end it all worked out for His glory and honor. 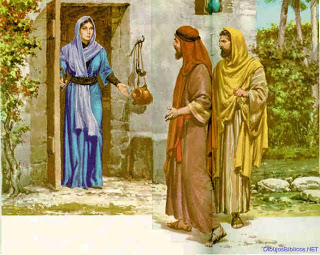 Nevertheless, someone, somehow, found out about them and went and told the king what was going on. Now remember the king and the people knew about these Israelites and wanted nothing to do with them. So the king sent soldiers to Rahab’s house and when Rahab saw that that there were soldiers coming, she quickly hid the two men up on her roof underneath her wheat (back in those days they dried out their own wheat, stored it and did everything for themselves, unlike today where we can just buy flour or the wheat berries).

The soldiers pounded on her door, she answered and asked them what they wanted. The soldiers told her that they heard that there were two men that had come to her and that they found out that these two men were spies to search out the land.

Rahab must have felt a little bit scared and worried knowing that the two men the soldiers were talking about were at that moment on her roof! She quickly told the soldiers there had indeed been two men that had come to her house, but, she said that she had no idea who they were and they had gone away before the gates had closed that night. (You must remember that Rahab was at this time also a pagan, but because of what she did, she is forever remembered in history.)

The soldiers quickly thanked her for her time and went out of the city in search of these two men. Rahab on the other hand went upstairs and told these two men that they had better go, but she told them not to go immediately back into their camp, “And she said unto them, Get you to the mountain, lest the pursuers meet you; and hide yourselves there three days, until the pursuers be returned: and afterward may ye go your way. Joshua 2:16 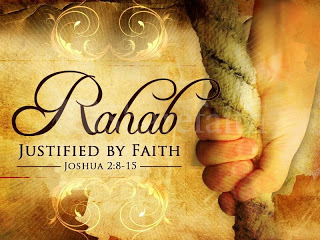 Then she proceeded to tell these two men that all of the land of Canaan had heard about them and their hearts were melting in fear. She also said that since she had helped them and had spared their lives, if the same could be done for her, that her and her family’s lives would be spared. She told them that she knew they were going to conquer this land and this city in particular and she wanted the assurance that not only her but her whole family would be safe.

These two men promised her that her and her family would be safe, on one condition. The red cord she was using to help the two men escape with was to be tied out the window of her house, to gather her family inside the house and to not to step foot outside the house until they would tell her it was safe to do so.

They also told her that if she told anyone their plans or went outside of the house while they were seizing it, their promise would be null and void. Rahab readily agreed and they made a promise right then and there between them and the Lord.

Rahab then let the two men down the wall of Jericho by the red cord and they went into the mountains just like Rahab had told them to do. In the meantime, Rahab was telling her family to come and stay inside her house, and I am almost positive that the first thing she did was to tie the red cord out her window, in fact she probably never untied it after the men got down from it.

After staying in the mountains for three days and three nights, the men went back to camp and told Joshua all that had happened.

Well we don’t have time to go into the story about how the Lord destroyed Jericho using the Israelites, but I will make it short so you can at least get an idea, and then if you would like me to expound on that in another blog, just leave a comment below letting me know.

All of a sudden the walls of the city started falling down and it all became rubble. The Israelites did not have to raise so much as a finger to invade that city; the only thing that they raised was their voices. If we had been there and had been given spiritual eyesight you would have seen angels around that city destroying it.

The only thing remaining of the city was Rahab’s house, and you could see the cord hanging out the window. Rahab was blessed of God because of what she had done for the 2 Israelite spies. She ended up marrying one of them and having a son named Boaz, Boaz in turn had a son named Obed, Obed had a son named Jesse, and Jesse then had a son named David, who became the well-known King David.

When we are faithful to God and heed His calling, He will bless us like He did the Israelites and like He did Rahab. All we have to do is to step out in faith, and sometimes that means hanging a cord out the window.

Like I said toward the beginning of this story there are several lessons that we can learn from this story. The first is to have faith in the Lord, that no matter how big the trial or temptation may be He is willing and capable of helping you and with His help you WILL OVERCOME. The second is that we must be willing to allow the Lord to work through us, because we never know the impact we may have on someone else’s life, after all our purpose on this earth is to seek and save the lost.

And the last one that I am going to mention is this, we must do what the Lord asks of us when He asks for it. There are things in motion every moment that we do not see. If we make the wrong choices and decisions, it won’t only effect ourselves but those around us as well. How can we lead others to Christ when we ourselves don’t follow and heed His warnings. If the Israelites had the faith they should have and belief in the Lord the first time they were at Jericho, there would have been no wandering in the desert for 40 years.

There are many other valuable lessons that we can learn, we often look at these stories in the Bible as children’s stories, but they aren’t just for children there are lessons in each one for us to learn from. We must dig deep in the Word of God, it says in the Spirit of Prophecy that in heaven there will be truths revealed from the Bible that we didn’t know was there, that is pretty powerful to think about, isn’t it? I want to have that kind of faith and trust in God, don’t you? I also want to be their in heaven to learn every day of my Savior and the love He has for me, don’t you?